Time to get serious.

I was late signing up for this programme, and so now I'm a little late in engaging with it. I will have to do most of my study on the weekends, and so I'm commencing my first week tasks a week late, during the second week.

I didn't think this would concern me too much, as I am an efficient worker and a fast learner, and I am committed to undertaking this programme properly. Even though I was nervous and a little worried - after all my last distance learning experience was pretty awful and I wasn't too sure on the required workload I would encounter this time around.

Imagine my delight when I opened my first week's tasks and was instructed to watch an episode of The Prisoner. My wife heard my howl of laughter from a couple of rooms away, and I had great joy in telling her I wasn't just watching TV, I was studying. 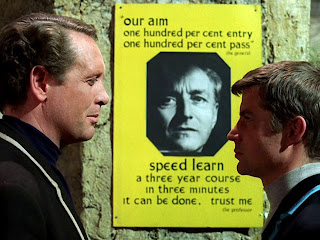 It's been a couple of years since I last saw this series, but it is a longtime favourite of mine. Even though I've seen it a few times, it was wonderful to watch it again. I did the pre-reading tasks and watched it with different eyes. And then I reflected, wrote my notes and answered the guiding questions I had been given.

This episode was The General, in which all citizens of the Village are able to undertake a three year University level qualification in three minutes through a breakthrough scientific method called Speedlearn, in which they watch TV and are fed studies through psychedelic/hypnotic images and music. Of course they all gain the knowledge, and can repeat facts parrot-fashion, but all have the same information - even the same knowledge.

One of my first thoughts connected this to the rote-learning scenes in Pink Floyd's The Wall. Right in the middle of Another Brick in the Wall (Part 2), the young boy is ridiculed by his teacher for being creative and writing poetry, before they return to reciting the times table.

Everyone is surely familiar with this son's refrain of We Don't Need No Education, We Don't Need No Thought Control. And at first it sounds like a nice little throwaway, anti-establishment slogan. But that's not what Roger Waters was referring to. He has been quoted as saying it's about bad education, about the strict education he encountered that stifled creativity and suppressed and stifled rather than inspired.

So I was thrilled when it was mentioned in the post-viewing notes.

Some other loose connections I made. If these were mapped, it would result in more of a rhizome than a mindmap:

Email ThisBlogThis!Share to TwitterShare to FacebookShare to Pinterest
Labels: Another Brick in the wall, education, Philp K Dick, Pink Floyd, The General, The Prisoner, Truman Show 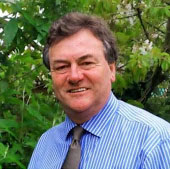 I am a Digital Education Developer at the University of Lincoln.

This blog originally started as an online journal while undertaking my Master of Digital Technologies, Communication and Education at the University of Manchester. It lasted only a short time before I realised I simply didn't have the time to regularly post to it while studying.

These days, this is a place for me to share the things that interest me in the world of Digital Technologies, Education and anything else that grabs my interest.